Since 1935, Rock City barns have stood as genuine highway Americana, their bold white-on-black signs compelling both snowbirds and Sunday drivers to a spot near Chattanooga, Tennessee, where they could “See Rock City.” Depression-weary Americans were just rekindling their love affair with the automobile when a marketing brainstorm by Rock City founder Garnet Carter turned some country barns into billboards that spread the word about the attraction's charms. 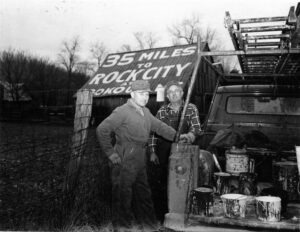 Clark Byers painted the barns for three decades and became a legend in his own right by braving bulls, slippery roofs and lightning bolts. When he retired in 1969, he had painted some 900 barns in 19 states. The usual arrangement was that the property owner received free passes to Rock City and an armload of promotional wares (like Rock City thermometers) along with the free painting for the use of his barn as an advertising aid. Those who didn’t need thermometers might be paid a modest sum of $3.

The highway beautification movement of Lyndon Johnson’s presidency saw roadside signs as more of an eyesore than an icon, and a piece of billboard-banning legislation nicknamed the “Ladybird Act” meant that many of Rock City’s rooftop messages had to be removed. Some of Byers’ most clever catch phrases were buried under new, plain coats of paint and after nearly being electrocuted during a thunderstorm while on a repainting job, he retired. 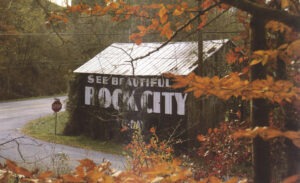 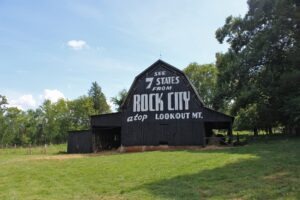 Byers’ successors still paint barns today, with most found in communities with colorful names like Stamps, Arkansas or Sunflower, Alabama. Tennessee, where the structures have been named historic landmarks, is still home to the most. Today, spotting one of these ever-recognizable structures not only gives tourists a look at a historic landmark, but also takes them on a nostalgic jaunt back to a time when motorists drove blacktop lanes in search of family fun.