Rock City Gardens’ history as a world-famous tourist attraction dates back to the days of the Great Depression, but its history as a geological marvel of nature reaches back several thousands of years before that.

Historical evidence shows that Native Americans inhabited Lookout Mountain. It was in 1823 that two missionaries, Daniel S. Butrick and William Chamberlain, arrived in the area to minister to the Indians. On August 28, 1823, Reverend Butrick made an entry in his diary describing “a citadel of rocks,” atop the mountain, noting the immense size of the boulders and stating that they were arranged in such a way “as to afford streets and lanes.”

By the time the Civil War reached the slopes of Lookout Mountain, more and more people had discovered what was already being called “the Rock City.” During the famous battle of Lookout Mountain, both a Union officer and a Confederate nurse speculated in separate diary entries that one could see seven states from atop the summit. Rock City remained well known to hikers and geologists throughout the later portion of the 1800s, but it would take the dawning of a new century before the fabulous Rock City would reach its full potential. 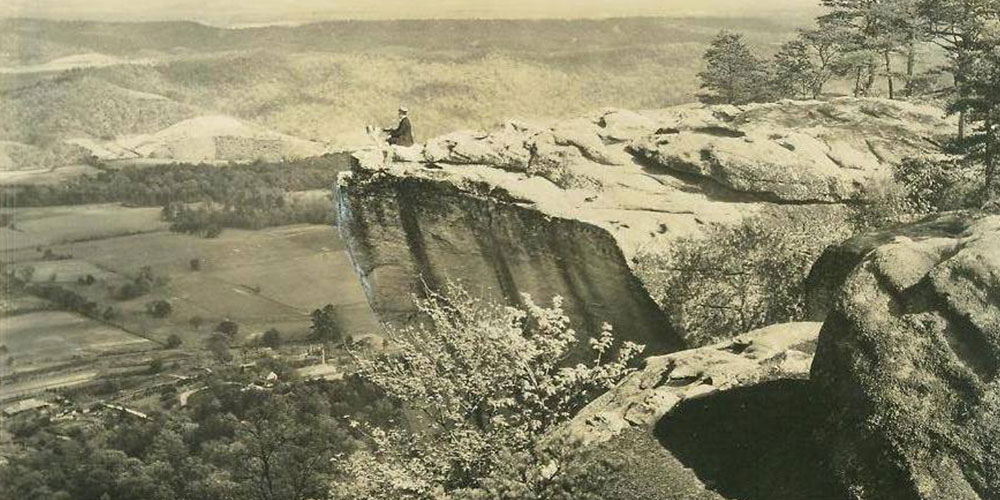 The man who would eventually make Rock City a household name was, appropriately enough, himself a product of the Tennessee hills. Garnet Carter was born in Sweetwater, Tennessee in 1883. At the age of 11, he and his family took up residence near Chattanooga on Lookout Mountain. A born promoter, Carter had tried and succeeded at a number of business ventures before hitting on the idea of developing a residential neighborhood on the top of Lookout Mountain. Launched in 1924, the new community was to be known as Fairyland, named so because of his wife Frieda’s long-time interest in European folklore. One of the enticing features of Fairyland was to be a golf course, but construction took considerably longer than was planned. In order to appease those who were clamoring to play golf, Carter responded by fashioning what is now recognized to be the nation’s first miniature golf course. Because of its popularity, Carter decided to franchise this miniature golf concept all over the United States; hence, the origins of Tom Thumb Golf. 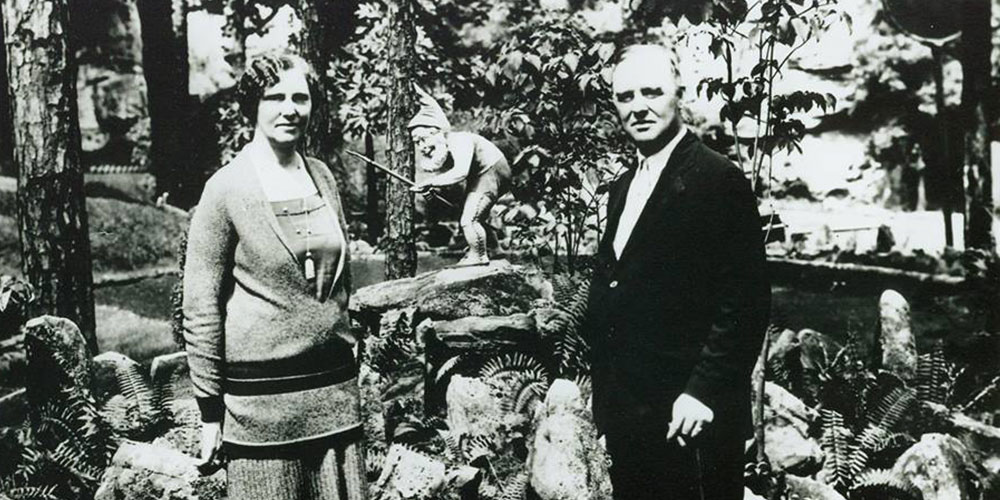 While Garnet Carter was “putting” around with Tom Thumb Golf, Frieda Carter had begun a project of her own. The 700 acres of Fairyland also encompassed the legendary Rock City, and Frieda set out to develop this property into a rock garden to end all rock gardens. When the Depression hit, Tom Thumb Golf fell to the “rough” and Garnet focused on his other business interests. It appeared to him that Frieda’s endeavor with Rock City had possibilities.

Frieda had taken string and marked a trail that wound its way around the giant rock formations, ending at the giant outcropping known as Lover’s Leap. She also collected wildflowers and other plants and had them transplanted along her trail. Frieda’s gardening was supplemented by imported German statues of gnomes and famous fairytale characters, which were stationed at points along the trail. Entrepreneur that he was, Garnet realized his wife had something there that lots of other people might be willing to pay to see. The rest, as they say, is history.

Rock City officially opened as a public attraction on May 21, 1932. It got off to a slow start because advertising in those days was difficult, especially since Carter’s mountain-top attraction was not located in a place that people would just happen to be passing by and take notice. It was at this point another brilliant idea of Carter’s was born. He enlisted the help of a young sign painter named Clark Byers, who was hired to travel the nation’s highways and offer to paint a farmer’s barns in exchange for letting him paint three simple words: See Rock City. The distinctive black-and-white signs appeared as far north as Michigan and as far west as Texas. The advertising soon began to produce the desired effect and by the close of the 1930s, more travelers than ever had seen Rock City Gardens.

Since its beginnings, Rock City has continued to attract an increasing number of tourists from all over the world. Each year, more than half a million people visit the attraction to enjoy the many natural splendors that abound. Over the years, several features have been added to the original attraction, including the popular Fairyland Caverns and Mother Goose Village, the Cornerstone Station, as well as a myriad of shops and restaurants and even a wedding venue. In addition, the annual events such as Rock City’s Enchanted Garden of Lights during the holiday season bring in guests by the droves. And the gardens Frieda so lovingly planted have also grown through the years to include more than 400 different species of native wildflowers, shrubs, and trees.

Through the years, Rock City Gardens has become a true American icon. Under the able leadership of Doug Chapin, a fourth-generation descendant of Garnet and Frieda, Rock City’s mission is to “Create Memories Worth Repeating.” With its nostalgic history, as well as its continual expansion for the future, Rock City Gardens has earned its reputation as a world-class destination and promises to be for generations to come.