Entry into Rock City is timed. Make a reservation now! 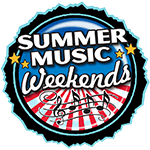 The Sweet Sounds of Summer on Lookout Mountain

Enjoy some of the best toe-tapping old time bluegrass and a mix of modern folk country music; combines with a Seven States view during Summer Music Weekends...featuring the music of Matt Downer-Old Time Traveler, Highbeams, Amber Carrington, and Tarryn Aimee Smith. Spend a summer day at Rock City Gardens, enjoy a fresh-squeezed lemonade, plan to dine at Cafe 7 (serving southern cuisine with a modern twist) AND check out the Rock City Birds of Prey raptor show in the Critter Classroom.

Cafe 7 stage is located near Lover’s Leap and the Seven States Flag Court.

Tours are on a first come, first serve basis and limited to 12 guests in each tour.

Wings to Soar shares their lovable rescue birds of prey during these interactive, uplifting, educational encounter.

Enjoy lunch at Cafe 7! The full service dining terraces at Lover’s Leap are the perfect place to take in the 7 states view while feasting on delicious Southern Cuisine. Open on Summer Music weekends days, 11:00am – 4:00pm with extended hours til 7:00pm on Fridays and Saturdays.

Nothing says summer like fresh squeezed lemonade! Purchase your souvenir cup for $9.99 and get refills in the park for $1.59. Cups and refills available at the Fudge Kitchen & Cliff Terrace.

Take a moment this summer and quench that summer thirst! The Drink Shack will host a variety beverages this year! From bottled water, slush puppies, and Coca-Cola products to beer on tap: Miller Light, Corona Extra, and Chattahooligan from the Chattanooga Brewing Company. 11:00am til 7:00pm at Prospector’s Point.

Cool off with a delicious soft serve ice cream – chocolate, vanilla, or both swirled together. This sweet refreshing treat is a summer classic! Wanting to take your ice cream treat with you, but without the mess of dripping ice cream? The Big Rock Grill can spin you a delicious milkshake This summer’s flavors include chocolate, vanilla, strawberry and blackberry. The Big Rock Grill also offers hamburgers, chicken fingers, hot dogs, and sandwiches for lunch or dinner.

Have a splash of summer with the Mango Dragonfruit Starbucks refresher or try the Dragon Drink with creamy coconut milk. Nothing says summer like a S’mores, so give the S’mores Frappucino at Starbucks a try.

Concerts held on Fridays, Saturdays, and Sundays from Memorial Day to Labor Day. See below for specific performer dates.

The Old Time Traveler, Matt Downer, has been playing old-time music in the TN Valley since 2005. Matt has earned a reputation for his high energy brand of traditional music, kicking new life into old tunes. Downer rotates through on fiddle, banjo, guitar, and vocals and a typical performance might feature anything from wild, red-hot fiddle tunes, to traditional ballads and novelty songs. Journey back to the roots of early Southern string band music with the Old Time Traveler and remember why folks still call them “the good old days”.

Amber Carrington is an American country music artist currently living in Nashville, TN. She most recently performed the Grand Ole Opry for a third time. She is an ASCAP songwriter and hard at work recording her first EP with all original material. She is very excited to share this new music with her globe-spanning fan base.

She gained her initial fame as a semi-finalist on Season 4 of NBC’s “The Voice”. Her natural voice, style and ease with country music challenged iconic Voice coach, Adam Levine of Maroon 5. Levine’s intuition to stretch this country girl’s imagination and possibilities with her powerhouse voice and talent took Amber’s voice into uncharted territory landing her in the top 10 of the iTunes Charts and and locked her in one of “The Voice’s” top 5 performers.

Three brothers with true passion for music. Adam and Ian Pendlington have been as close as brothers since birth. The boys played in a few different bands growing up, but finally came together to make a band built with the strongest band in the universe: family.

Bass player Stephen Quinn completed the trio just before graduating high school. In their first meeting, they tossed around song ideas including tracks from the future debut EP.

Over five years later, they have traveled across the country and performed all over their home state of Georgia from small house parties to large festivals. The band coined the term “adventure rock” for themselves from their love of venturing into the unknown. They became well known for their passionate, high energy live performances, tight harmonies, and feel good music. They finally solidified their local fan base with the release of their first full-length album in May 2013.

While touring Georgia and surrounding states, the band had been writing a follow up to the 2013 release. Finally choosing to record the next album in their own home, the result captured the truest side of their music…Highbeams “ONE WORD” was released June 20, 2014, with the belief that the strength of the songs and love in the music would shine through in today’s music scene. The album was very successful, garnering the band’s first ever nationwide college radio play and even caught the attention of a few major radio and television networks. Along with that, “ONE WORD” set another milestone being the first release to sell completely out of physical copies.

Today, Highbeams continues a busy tour schedule and is always striving to raise the bar for themselves in all aspects of their music. Highbeams is Adam Pendlington, Ian Pendlington, and Stephen Quinn.

Tarryn Aimee Smith is an Americana singer-songwriter whose music is a unique blend of folk, bluegrass, jazz, and country. Many who hear Tarryn’s voice describe it as pure and smooth, with an angelic quality reminiscent of Allison Krause. Based in the Nashville area, the multi-instrumentalist plays regularly at local restaurants, music venues, private and house parties, and festivals in Tennessee and other states. In 2012, she signed with Second City Music Group as a staff songwriter. Her song “Expecting Good Things”, which she co-wrote with Wil Nance and Steve Dean, was the title cut of Jeff and Shari Easter’s Grammy Nominated album in 2010, and a live recording of the song was also placed on the Gaither Homecoming “Majesty” CD and DVD set. As an artist, Tarryn’s music has been played along with interviews on numerous radio stations across the country. With diverse influences including James Taylor, Dolly Parton, Bonnie Raitt, Willie Nelson, the Eagles, the Judd’s, Joni Mitchell, Frank Sinatra, and Ella Fitzgerald, Tarryn enjoys writing a variety of music styles. She also specializes in acoustic arrangements of classic songs, similar to the styling of the late Eva Cassidy.

Enjoy the beauty of what’s blooming all summer at Rock City!

This Summer, look for Limelight Hydrangeas, Petunias, Purple Heart Plant, Sunpatiens, and Becky Shasta Daisies among many others blooming in our gardens. 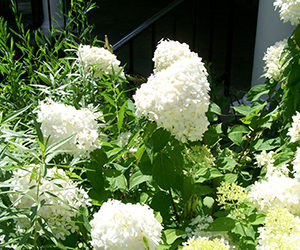 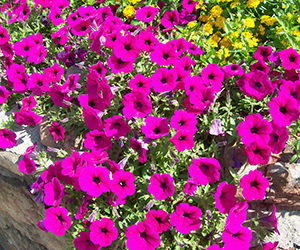 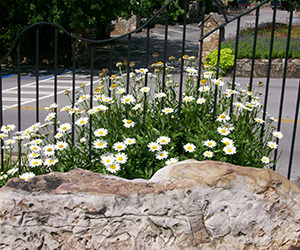 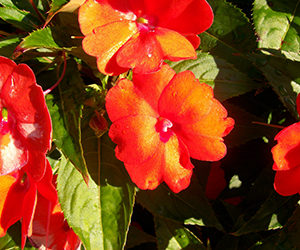 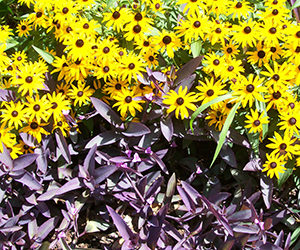 The Lula Lake Land Trust seeks to create a network of conservation properties within the watershed that will ensure protection and enhancement of local water quality, protect areas which maintain contiguous forest cover and scenic views, provide opportunities for research and education programs and designate areas suitable for public access, use and enjoyment. Through our programs and activities, we will continue to influence future public and private efforts to create a continuous conservation landscape on the mountain.